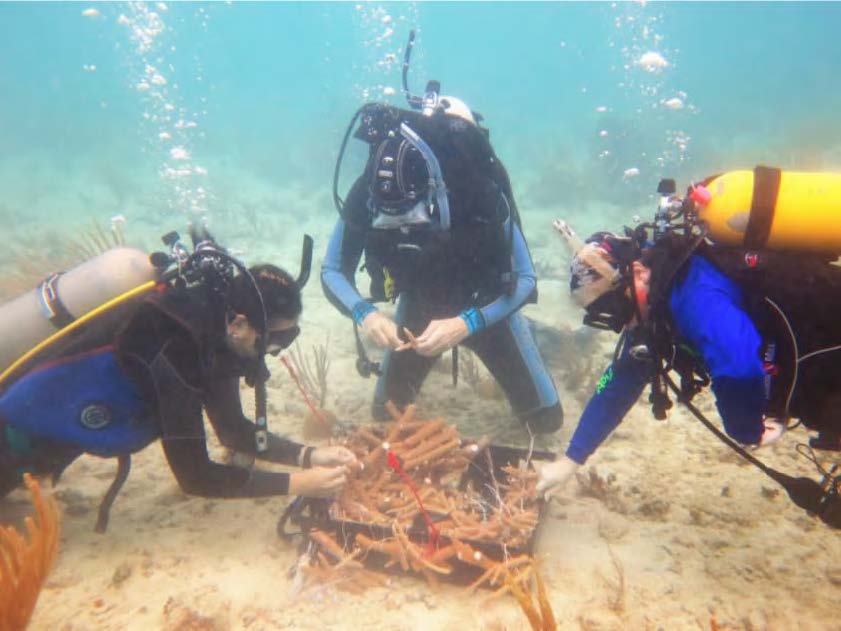 Corals may live underwater, but their problems often start on land. Now for the first time, partners in Puerto Rico are coordinating efforts on the land and in the sea to revive their declining corals.

This terrestrial-marine approach to restoration is happening near Culebra Island, a populated island about 20 miles east of Puerto Rico’s main island and part of the only NOAA Habitat Focus Area in the Caribbean: the Northeast Marine Corridor and Culebra Island.

The approach has united many people and added thousands of corals to the reef system. “Everything has come together to do something very good for coral reefs in Culebra. Everyone is on the same page,” said Roberto Viqueira-Rios, from Protectors of Watersheds (Protectores de Cuencas), a local nonprofit and NOAA partner.

Stopping the Flow of Dirt

Work on the land focuses on preventing mud and other contaminants from washing into the ocean, where they can smother and kill corals. The mayor of Culebra Island, William Iván Solis, appreciates the protection provided by Viqueira-Rios’ organization: “The work of Protectors of Watersheds has been very important in Culebra, because it has reduced sedimentation that that would affect corals in our waters. The structures they placed on the roads and parking lots filter the contaminated water, and conditions are much better at these sites now,” he stated in Spanish.

In the ocean, experts are trying to rebuild reefs in ways that mimic reforestation on land. Using an approach of coral gardening or “farming,” scientists raise corals in controlled conditions and then plant them onto the seafloor. These farmed corals supplement the existing coral animals and enhance the foundation of the reef ecosystem. Most commonly raised is the threatened species of staghorn coral (A. cervicornis).

Teams plan to add thousands more to the 3,000 corals already planted near Culebra Island. Observations find that staghorn corals transplanted here have a 99 percent survival rate during a six-month period.

Earlier this year, a boat grounding led to the replanting of nearly 2,000 coral fragments from Palomino Island, which is also with the NOAA Habitat Focus Area.

For coral-related work, the Habitat Focus Area is receiving funding from NOAA, which has attracted matching contributions from partners. Leading the underwater effort is the nonprofit SAM (Sociedad Ambiente Marino), which runs one of the Caribbean’s oldest coral farming projects. Protectors of Watersheds leads restoration efforts on land, and all projects bring together public and private partners.

The venture represents Puerto Rico’s first full integration of land-based restoration with underwater coral reef rehabilitation. These land-sea efforts hit the bullseye of one of the Habitat Focus Area’s four main goals: the recovery of endangered corals. Read about other goals and plans within the area’s new, detailed Implementation Plan.

Soon, the Habitat Focus Area plans to increase coral farming close to the northeast of Puerto Rico’s main island and its nearby, uninhabited islands.