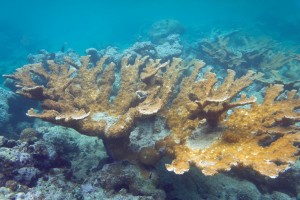 A motorboat in Puerto Rico crushed corals into thousands of pieces when it ran aground on February 18, and bad weather has complicated recovery efforts. The boat Noemi del Mar was quickly removed from the shallows of Palomino Island, which is within a NOAA Habitat Focus Area. Most of the nearly 2,000 living pieces of threatened elkhorn coral remain separated from the reef.

Seas of 15 feet and winds at 30 knots have prevented restoration experts from reaching the crash site. A dive operation was able to collect some coral pieces soon after the grounding.

“The grounding site is exposed and very difficult to work in. Hopefully soon we’ll get back to work when the weather improves,” said Sean Griffin with the NOAA Restoration Center in Puerto Rico.

Griffin said that 85 boat groundings have been reported since 2009 within the open marine Habitat Focus Area, called the Northeast Marine Corridor and Culebra Island. The highest number of 19 groundings was in 2016. In response, more than 3,000 coral pieces have been reattached.

After the recent accident, the diving shop Sea Ventures collected and protected 550 of the estimated 2,000 fragments of elkhorn coral. It placed 250 fragments in an existing coral nursery nearby. New coral fragments like these remain alive, and they can grow into adults in good conditions. In poor conditions, however, sand can smother these animals.

When weather conditions improve, the NOAA restoration team will move the fragments or reattach them locally. But they need good weather and flat seas to glue the fragments onto their native reef. Other options include moving the coral pieces to nurseries or to other reef sites.

Six coral nurseries in the Habitat Focus Area are a collaboration between NOAA, the Puerto Rican Department of Natural and Environmental Resources, Sea Ventures, the University of Puerto Rico, and Sociedad Ambiente Marino (SAM), which operates some of the oldest nurseries, or coral farms, in the Caribbean.

The team planted nearly 1,000 staghorn corals at three sites in August 2016, and they are doing well, according to Griffin.

Elkhorn and staghorn corals became the first corals listed as threatened under the Endangered Species Act in 2006, and NOAA published their recovery plan in 2015.

Below are stories from NOAA about boat safety, groundings, and restoration in Puerto Rico: