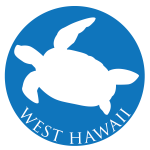 The northwest coast of the island of Hawaiʻi is a unique habitat known for its clear waters and vibrant coral reefs. West Hawai‘i contains one of the state’s longest contiguous coral reefs, supporting an abundance of corals and fish, of which nearly a quarter are found nowhere else in the world. The area is home to several endangered or threatened species, such as Hawaiian Monk Seals (ʻīlio holo i ka uaua), humpback whales (Koholā), and green sea turtles (Honu).

From its highly significant cultural sites to its thriving resort industry, West Hawaiʻi is important to the region’s economy, history, culture and environment. However, numerous threats are currently leading to habitat loss in the area.

Details about the objectives and specific actions NOAA is implementing can be found in the West Hawaiʻi Habitat Focus Area Implementation Plan.

NOAA offices and programs in the Pacific Islands region are working with federal and state agencies, local communities, non-profit organizations and businesses to improve ocean health along West Hawai‘i’s coastline. Pooling resources and focusing efforts in this area can make a larger collective impact toward creating a more resilient landscape around the shared goals of healthy reefs, abundant fisheries and thriving communities.