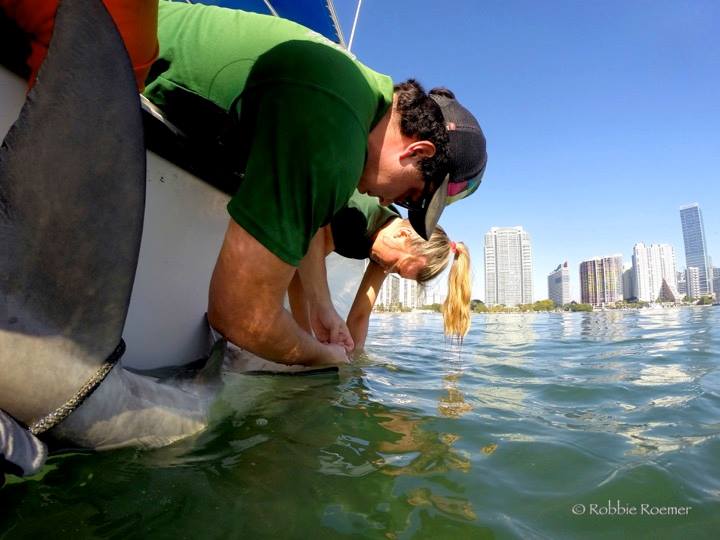 Do alien-looking fish still swim around Miami? The effort to confirm the movements of endangered smalltooth sawfish near Florida’s largest city got delayed by October’s hurricane, but a scientific pit crew is busy putting its project back on track.

The University of Miami’s Urban Sharks project is expanding in Biscayne Bay. Although this program is not tagging sawfish, any detections of smalltooth sawfish,  tagged elsewhere, would give experts additional facts on the distribution of this severely endangered species, once plentiful around the Florida peninsula. Expansion of the acoustic receiver network in Biscayne Bay could make detection of a tagged sawfish there much more likely.

“Everything was up and running with all 32 receiver units deployed by the middle of September. Then we had a near miss from Hurricane Matthew October 5 to 6,” says NOAA biologist Tom Jackson. When the hurricane skirted the south Florida coast, it tossed around the new technology in Biscayne Bay, a NOAA Habitat Focus Area.

Now project partners are re-inspecting and fixing the project’s 32 sonic devices. For several months, the devices will capture “pings” when sawfish or sharks with acoustic tags swim by, and these sounds will allow researchers to identify individual fish. Each surgically-inserted acoustic tag has a specific frequency.

“Hypothetically, Larry-the-sawfish’s tag makes a ‘ping-ping,’ while Bertha’s tag makes a ‘pong-pong,’” says Jackson, giving the fish imaginary names. Jackson has been hearing from fishermen about recent sightings in Biscayne Bay and wants to confirm them scientifically.

With the nose of a saw and the body of a shark, Florida’s smalltooth sawfish are as strange-looking as they are rare. In 2003 they became the first elasmobranch (the taxonomic group containing most sharks and rays) listed under the Endangered Species Act.

If you see or accidentally catch a smalltooth sawfish, please report it to 1-844-4SAWFISH. Public information is greatly valued and appreciated.