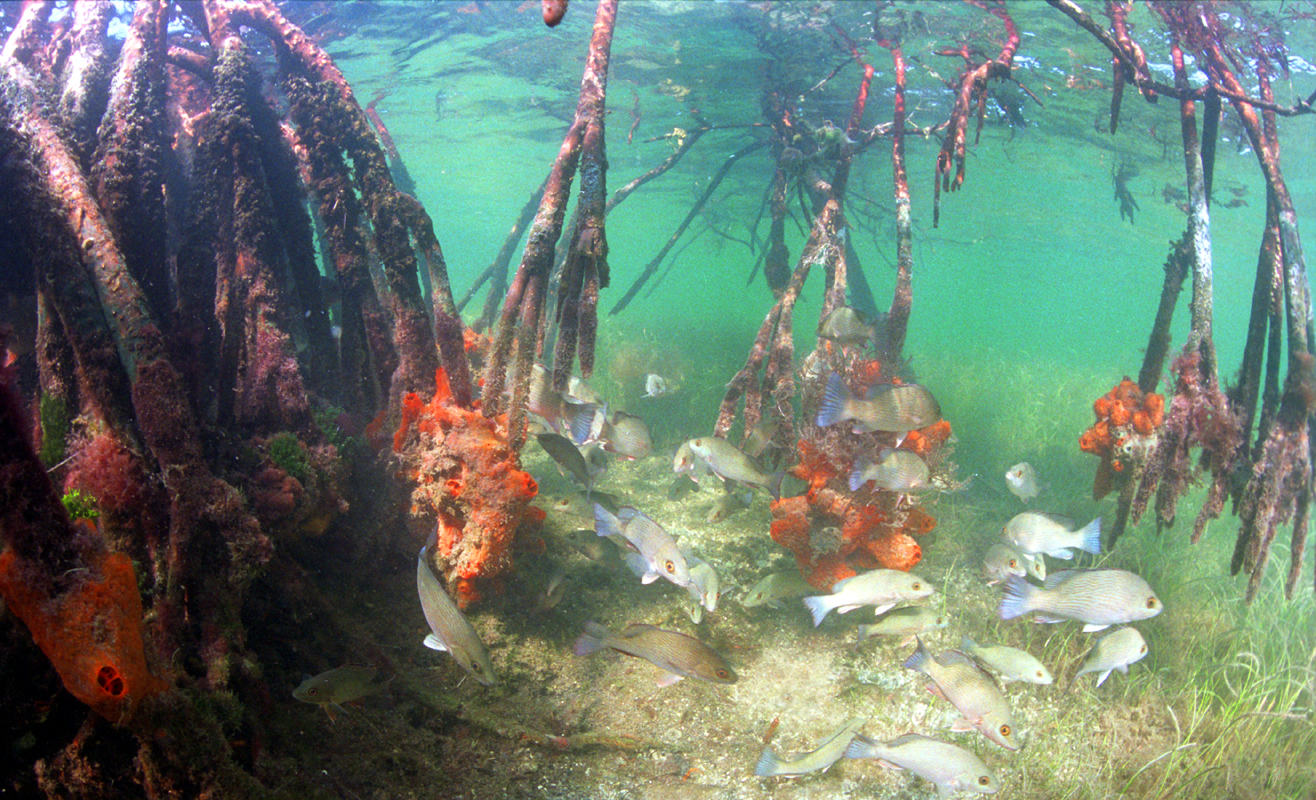 Will declining water quality impact local Biscayne Bay businesses? A recent study conducted by scientists at the University of Miami suggests that degraded water quality conditions change how people use the bay, with significant implications for the local economy.

Biscayne Bay, which shares its shoreline with the Miami urban area, supports a wide array of commercial and recreational fishing, watersports, and seafood wholesale businesses. Local residents and visitors enjoy and depend upon its extensive mangrove shorelines, seagrass meadows, and coral reefs that serve as habitat for the bay’s fish.

Concerns about declining water quality, and the threat it poses to both ecological and human communities, led to Biscayne Bay’s designation as a NOAA Habitat Focus Area. Nutrient-rich runoff from the nearby metropolitan and agricultural areas flows into the Bay, and has led to large algae blooms that are damaging to the health of the marine species that inhabit this unique ecosystem. These blooms may produce toxins that harm other marine organisms and humans, block the sunlight needed by seagrass meadows, and deplete oxygen in the water. Until now, the ways that these algae blooms affect the people who rely on the bay for livelihood and recreation have been poorly understood.

One of the primary goals of the Habitat Focus Area team and its partners is to assess how the degraded health of the bay is impacting local businesses in order to ensure that they are adequately protected into the future. With NOAA funding, two scientists from the University of Miami set out to do just that. One main question these scientists worked to answer is whether fishing and recreation adapt to declining water quality by shifting to different, healthier parts of Biscayne Bay. The results of this study, which describe how those users perceive and respond to water quality challenges, will provide local policymakers and the public with information about the associated economic losses from degraded ecosystem health.

Researchers asked businesses: what areas of the bay are most important to you?

To determine popular locations used by different stakeholder groups, the researchers sent out online surveys and conducted in-person interviews to recreational and commercial fishermen, fishing guides, seafood wholesalers, and recreational watersports businesses (SCUBA, snorkel, kayak, and stand up paddle board companies). These surveys identified where activities are most concentrated and how industries would respond to declining water quality conditions. The answers allowed researchers to assess water quality impacts on these activities.

The surveys and interviews indicated that each user group depends on different regions of Biscayne Bay. Recreational fishers, for example, more frequently visit the southern half of Biscayne National Park, especially those areas offshore of the southern barrier islands, while recreational watersports businesses heavily use areas off Miami Beach and in the Northern Bay.  The seafood wholesalers who rely on products from Biscayne Bay reported that they obtain their fish from areas both within the Bay and along the reef tract outside of the bay.

Commercial fishers in Biscayne Bay target four major groups of species: stone crab, spiny lobster, bait shrimp, and other bait species. Each of these is fished in different areas both inside and outside of Biscayne Bay. The shrimpers in particular noted that they previously fished in areas north of the Rickenbacker, but have shifted their activity further south as a result of deteriorated water quality in the northern area.

Degraded water quality changes how and where people use the bay

All user groups agree that water quality in the bay is declining. However, adaptation to degraded water quality varies by industry group. Most recreational fishers, fishing guides, recreational watersports businesses, and seafood wholesalers said they would continue to operate, but would move to alternative locations – most likely outside the bay. Commercial fishers, on the other hand, would likely stop fishing commercially if they were unable to rely on their current fishing grounds. Without a healthy Biscayne Bay, commercial fishers who rely on the bay for their livelihood will lose their jobs, in turn affecting the local economy.

By working with partners like the University of Miami, the Biscayne Bay Habitat Focus Area is able to better understand and communicate the importance of maintaining a healthy bay for all users. Results from this study show that if Biscayne Bay continues to experience periods of degraded water quality, all users will cease to rely on the bay for their operations and will adjust to areas located outside of the bay. Biscayne Bay relies on the stewardship and engagement of local citizens and visitors to ensure that the ecological, economic, and social benefits of the Bay are conserved into the future.

To find out more about this project, please visit this Miami Waterkeeper Story Map or contact Samantha Dowdell at sdowdell@rsmas.miami.edu.